Colorblends / Learn / Why Do They Grow Tulips in Holland?

Why Do They Grow Tulips in Holland? Contrary to popular belief, tulips are not native to the Netherlands. So why are 99% of the world’s tulip bulbs grown there? The answer comes down to wealth, weather, and work.

Tulips made their way west from the mountainous regions of Central Asia, via the Silk Road, to Constantinople (seat of the Ottoman Empire) in the early 1500s. Toward the end of that century, bulbs came into the hands of Carolus Clusius, the leading botanist of the age, who then managed the botanical garden at the University of Leiden in the Netherlands.

Clusius shared bulbs with friends and colleagues across Europe, but it was in the Netherlands that tulips really took root. Despite its size, the Netherlands was then the wealthiest country in the world. The ships of the Dutch East India Company sailed the globe and returned with raw materials and goods that a thriving merchant class repackaged and resold at tremendous profit. This wealth nurtured a keen interest in natural history and botany, and the tulip, with its exotic blooms and glorious colors, became an object of desire. Coincidentally, the regions along the coast of the Netherlands offered perfect conditions for growing tulips. The North Sea has a moderating influence on the climate, keeping winters mild, despite the latitude, and more importantly for tulips, keeping late spring and early summer very cool. It is during the 8-10 weeks after bloom in April that the tulip makes new bulbs. Cool weather promotes growth; heat stops it in its tracks. Meanwhile, the constant wind coming off of the water helps keep insects at bay, and the sandy soil, much of it reclaimed from the ocean, provides the drainage that tulips prefer. The Dutch made the most of the tulip’s potential through hard work. The Dutch are known to be a thrifty, hard-working, and tolerant people. People fleeing prosecution or seeking a better life were drawn to this culture and this country below sea level, partially built in a river delta and pushed up against the sea. These newcomers adopted the work ethic and culture of cooperation to survive and thrive. The Dutch have held back the ocean and drained the land where millions of tulips are now grown. There is an expression that goes: “God created the world, but the Dutch created the Netherlands.” This same industriousness took a handful of tulip bulbs and built them into the worldwide icon we know today. 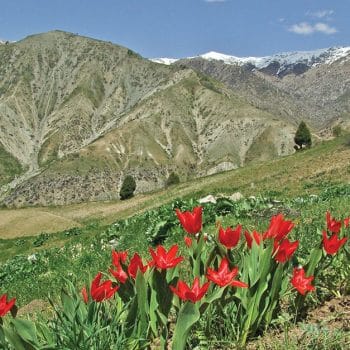 Where Do Tulips Come From?

Most people associate tulips with Holland, but they didn’t originate there.
Read More 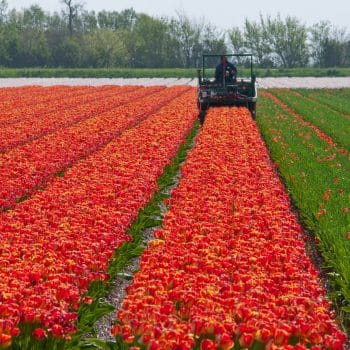 Off With Their Heads!

In Holland, when tulips start to bloom in the fields, Dutch bulb growers do their best to cut off the flowers as quickly as possible.
Read More