Colorblends / Learn / Winter – An Important Time for a Flowerbulb

Winter – An Important Time for a Flowerbulb

Winter cold is essential to the life cycle of bulbs.

Bulbs begin to grow roots in the weeks after fall planting, prompted by the cooling soil. Then, preparation for winter begins, as some of the stored energy in the bulb changes into an “antifreeze” that protects it from damage during the coldest winter weather. Tulips and many other spring-flowering bulbs evolved in cold-winter climates. They not only expect an extended cold period they require it. It is one of nature’s mysteries that each bulb knows how much cold it needs. Most bulbs require between 10 and 17 weeks, during which time the soil temperature remains below 45 degrees Fahrenheit. Snowdrops, Winter Wolf’s Bane, and crocuses require fewer weeks of cold and are the first to bloom. Later blooming bulbs such as Snowflakes and tulips need a longer cold period to grow and bloom correctly.

Bulbs recognize that spring is coming by the warming of the soil. As the soil warms, the bulb “re-awakens” and begins to prepare for growth. The “antifreeze” changes back into energy reserves, and in a few weeks, the first green shoots appear above the soil. In much of the United States, the extended cold period that most bulbs require is provided naturally by winter. What happens in parts of the country where winters are mild and flowerbulbs don’t get enough cold? They may fail to perform, or they may be stunted, growing just a fraction of their normal height. In the South and in California, it is possible to supplement the cold that bulbs require by prechilling them – placing them in a refrigerator for 6 – 12 weeks before planting in late fall or early winter. 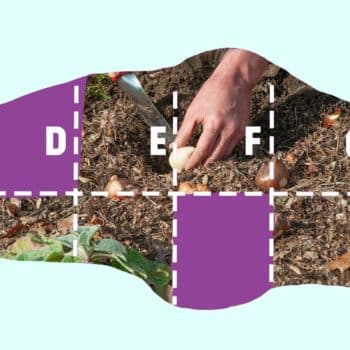 How Many Bulbs Do I Need?

Here you will find formulas for calculating the square footage of a planting area.
Read More 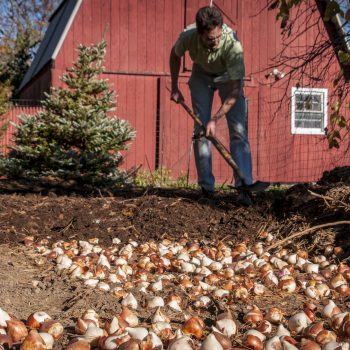 Planting bulbs is easy. Warning: Your back may disagree with that statement.
Read More